Why Manx cats have no tails?

Isle of Man in Britain is known for its cats that are seemingly like any other, but with one striking difference: these cats have no tails.

Some cats without a tail lost them due to injury, and in rarer cases, due to abuse. But some cats like those in the Isle of Man, are born that way (Figure 1).

Cat’s tail has a few important functions. Cats use their tails to keep balance when jumping and running. Because tails are the most expressive body part, tail movements help cats to communicate with other cats (and humans).

But disadvantages of not having a tail do not end up here. Cats without tails are less healthy and apparently have less satisfying lives. They have abnormalities in their spines and difficulties moving their hind legs (1,2,3). Some of these cats are unable to control their bladder and bowels, while other unlucky individuals are born with blocked or missing anus!

So why do these cats exist at all? One of the reasons is a mutation. 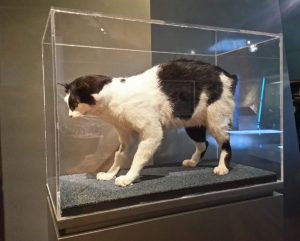 Geneticists discovered that there are four genetic mutations called “T” that can result in a short tail or no tail in a Manx breed and natural cats from Isle of Man (4).

T gene or T-Brachyury (from the Greekbrakhus oura means a short tail) affects the tail length in animals with backbones (vertebrates) like fish, birds and of course, mammals. 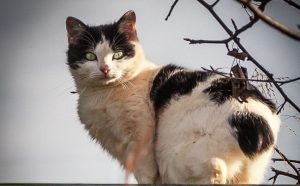 There is no reason to think that these mutations occurred in the Isle of Man, it is more likely they were present in founder population that populated the island.

Besides T gene, the mutations in HES7 gene and others were identified as a cause of tail deformities in cats from China (5).

Cats with tailless mutations have varying tail lengths: from absent tail as seen in Manx breed to the tail that looks normal (Figure 2). 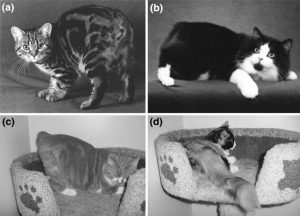 According to geneticist Prof. Leslie A. Lyons, the natural selection clearly does not favor cats with tailless mutations. Cats who inherit two copies of the mutation do not survive and usually die in a womb (6).

“You never see these babies born, or they never develop. That means there is a high selection against this mutation,” says L. A. Lyons (7).

Why are these mutations still passed down from generation to generation? The answer is humans.

There were many more tailless cats on the Isle of Man in the past probably because humans wanted to see these cats around by feeding and looking after them. But now, this is cat breeders who keep these mutations alive by producing more cats without tails in order to propagate their “Manx” breed. 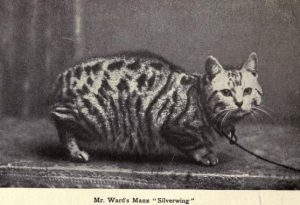 Silverwing – one of the first cats to represent the Manx cat breed (1902). Biodiversity Heritage Library / University of California Libraries.

Is it ethical continuing a breed whose characteristics are based on such damaging genes? If we think cat welfare and health as a priority, the breeding of Manx and other cat breeds with tail deformities, Japanese Bobtail, Pixie-Bob, American Bobtail and Kurilian Bobtail, should cease.

While debating the ethics of breeding cats without tails, we should not forget the larger picture.

Cat and dog breeding was never about the health or for the benefit of the animal. Human selection has led to the accumulation of many deleterious genes in cat and dog breeds (8, 9).

It appears that a “healthy cat breed” is an oxymoron rather than a reality. The length of the tail or absence of it probably is not going to make much difference here, as long as breeding cats with disabilities continue to be seen as a harmless act of “preserving” breeds that do not need to be preserved.

Maria is a researcher and self-proclaimed cat lover who is interested in smaller wildcats and feral cat welfare. She has a degree in Evolutionary Biology.

Smoking kills: Cigarette smoke can give your cat...