Mass media has a significant influence on how we see the world. The animal cruelty resulting from animal hoarding is rarely on news, and when it gets reported we are given the most extreme examples, like an elderly woman who lives in a filthy house, covered with dead bodies of cats and dogs. However, in most cases of animal hoarding, animals do not live in such horrific conditions (1). In fact, some hoarders may even succeed to create an impression that their animals are well cared of.

The lack of research on animal hoarding, its recognition, and prevention shows that animal hoarding is still not taken seriously enough and remains largely unrecognized and misunderstood problem (2,3).

Majority of people learn about the animal hoarding from mainstream media. In Turkish media, hoarders are often portrayed with a sympathy. They are shown as rescues who dedicated their lives to save animals (4, 5, 6, 14). These people supposedly love animals too much. They believe that their activities benefit animals, that they perform an important “community service” by taking cats and dogs from the streets to their houses (1,17).

Contrary to prevalent belief, hoarders do not have a large number of animals because they fail to neuter them. Hoarders who think themselves as “rescuers” in particular, do neuter their animals and may give them up for adoption (2,3). The number of animals in hoarder’s house usually grows because a hoarder continues to collect the new animals. 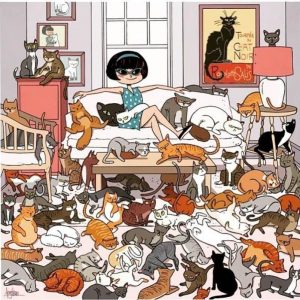 Hoarding does not happen in private houses only. Hoarders may also run shelters, rehabilitation centers and sanctuaries (15). These hoarders usually ask for help and donations when their conditions worsen. The donations provide the support for the hoarder to continue his or her obsession with keeping many animals in one place and adding the new ones.

Beware “Rescuers” Who Are Really Hoarders

The large majority of hoarders are females over 50-60 years old who live alone (1).

The first sign of potential hoarder is the number of animals owned. Research shows that people who own twenty cats or more, tend to have anxiety and psychological disturbances similar to those of convicted hoarders (7). The hoarders whose stories appear on media outlets, often live with more than 50-200 animals in their houses. However, a hoarder may have a much smaller number of cats, yet still be unable to care for them properly (20).

We got used to seeing the extreme images of animal hoarding on media and think that hoarders are the people with serious mental issues. While it’s true, that many hoarders have psychological problems, there are those who do not fit the “middle-aged crazy cat lady” stereotype. Men, married couples, cat breeders and even veterinarians can be animal hoarders (3, 16, 19). These people often live double lives hiding their obsession with collecting animals from their friends, family, and co-workers. 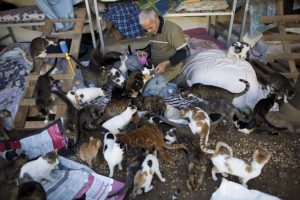 Hoarders often complain about their difficulties of taking care of that many animals. They also believe, if they had not taken those animals, the animals supposedly would have miserable lives on the streets or would be dead (8). “Any life better than no life” is not only used as motivation by hoarders but also describes the agenda of many animal rights organizations in Turkey.

The ability to properly care for the animals is currently used as a guide when deciding whether someone is a hoarder or not. The fact that a hoarder may be capable to provide the basic care for its animals and its house appears to be clean, does not mean that the hoarding is not happening. The tragedy can strike at any time. We should remember even in those extreme cases of hoarding, hoarders were able to keep animals in bearable conditions at first but later became overwhelmed.

Media Ignores the Welfare of Animals; Portrays the Hoarders as “Heroes”

The living conditions of many (potential) hoarders may seem to be satisfactory because these hoarders are successful at maintaining a positive image of someone who “works hard to look after the animals” (17). Hoarders featured on media, prepare and tidy their houses if they know the journalists are going to visit them. So there is no way one visit of the journalist and a few photographs taken can document the conditions in which animals live.

The neighbors of hoarders and even their relatives may also know very little how a hoarder treats its animals. Hoarders may not answer their doors when knocked and avoid any new visitors. When neighbors keep complaining about the terrible smell coming from hoarder’s home, only then people begin to think about the possibility of animal abuse (1). 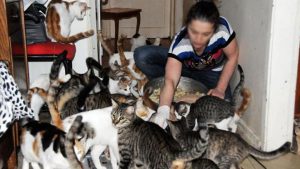 Many hoarders believe that their animals are happy and healthy, painting a picture of their animals’ love for them. The media also emphasizes the feelings and motivations of the hoarder and completely ignores the impact of hoarder’s actions on animals.

Even if animals do not look like starving or critically ill, their welfare is severely affected in many ways due to overcrowding (10). A hoarder may believe that its house is a heaven for these animals because they get fed and are safe from dangers, but animal welfare is more than a food or shelter (8, 9). We do not think prisons as ideal places for people because people are given food and the places where they stay seem to be relatively safe. But why do we still hold such narrow views on animal welfare then?

The spread of disease in a large group of cats is rapid but prevention is very difficult. Cats living in crowded conditions suffer from many infectious diseases (11).

For instance, Feline Herpesvirus 1 (FHV-1) is a common problem in large groups of cats, in particularly shelters and multicat households. A cat may be healthy before arriving at hoarder’s house, but once exposed to a large number of cats, it may get infected with FHV-1.

Even if a cat recovers from the virus, the virus remains in its body and reappears due to stress (12). Prolonged stress due to overcrowding is damaging psychologically and weakens cat’s immunity system. 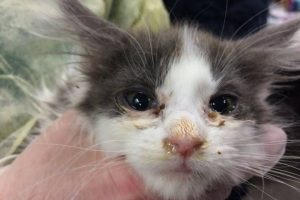 To provide good care for >20 cats equally is almost impossible, especially if a single individual is responsible for their care. Cats need environmental enrichment, playtime and they want novelty and conditions to express its species-appropriate behavior (13). Most of the households cannot meet the psychological needs of one or two cats, think how it is even possible to make, let’s say, 200 cats happy?!

Keeping many cats in one place, be it in a house or a shelter causes a harm to cat’s psychology, health, and well-being. If hoarders cared about these things they would not keep that many cats in their houses in the first place. Even if hoarder regards themselves as compassionate animal lovers, the hoarding is still a selfish act, indifferent to the needs of animals (8).

Media behaves irresponsibly by showing hoarders as animal lovers and devoted rescuers. Media also overlooks the less dramatic cases of neglect (1). While journalists tend to focus on personal stories and the feelings of hoarders, the harm the hoarder inflicts (or may inflict in the future) on its animals is never voiced.

No easy solutions to animal hoarding

There are many Individuals who were never accused of being hoarders because people think them as being rescuers. It is not uncommon to see these individuals, who admit having lots of animals, to beg for donations and other material support on media outlets, including social media, because they are too poor to buy food for their animals (4,18). These are classical animal hoarders. Instead of pitying these individuals, pity their animals and report these individuals to authorities for investigation of animal cruelty.

If authorities discover that animal hoarding occurred, they usually seize the animals from hoarder’s property. Ironically, it is not the hoarders who get punished but their cats: cats rescued from hoarder’s house end up in the shelters, where they still have a poor quality of life. We need to look for alternative ways of dealing with animals rescued from houses of hoarders.

While harsher punishments could prevent some cases of animal hoarding, the prevention is the key. To prevent animals from becoming the victims of hoarders, we should be able to recognize the potential hoarders before they have a chance to cause the suffering of animals. This means, anyone who keeps unusually large numbers of animals is at risk of becoming a hoarder, therefore these individuals should be monitored. There should be laws restricting the number of pets allowed per household. These individuals, as well as convicted hoarders, should be encouraged to seek psychological counseling and therapy.

Animal rights and rescue organizations should stop spreading gruesome propaganda about the living conditions of cats on the streets and that every cat “desires a home”. Hoarders should also not be portrayed as animal savors, and people need to be told not to support them financially – these two factors enable the animal hoarding to continue and only make the problem worse.

As for media, there is no excuse for normalizing and trivializing the animal hoarding when animals suffer at the hands of hoarders.

As a former advocate for animal rights, she questions the animal rights movement and its ideology. Her interests are ethical dilemmas, nature and Anatolian felines.