Is this two-faced cat a chimera? The case of Venus, Quimera and Narnia

When we say that a cat is a chimera we mean that it has cells from its unborn twin. It’s like…

We hear a lot about chimera cats. A cat with the symmetrical half-colored face is what we think the chimera should look like. The most known example of a chimera is a cat called Venus, but other cats such as Quimera and Narnia also became Internet sensations because of their striking two-face markings. Are these cats real chimeras or just a result of mere chance?

Chimera is an animal that is made up of two types of genetically different cells. Chimeras happen when two fertilized eggs or early embryos merge in the womb, leaving only one fetus. When we say that a cat is a chimera we mean that it has cells from its unborn twin. It’s like two cats in one!

Some chimera cats may have some odd patterns and colour patches on their coats. However, many look completely normal from the outside, so the only way to find out if the cat is a real chimera is to do a DNA test.

One more fact: Humans can be chimeras too, but most of them live without ever realizing that they are chimeras (2). 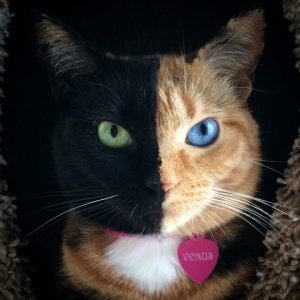 Undeniably, Venus has a very unique face, but it is not a chimera (1). Venus is a female cat, and like many female cats, it has a fur that looks like a mixture of black and orange pigments. Such cats are called tortoiseshell or calico – a name given to tortoiseshell cats with white patches.

It is true that male cats are almost never tortoiseshell/calicos for a good reason. Black and orange pigments are carried on the X chromosome. Unlike females who are XX, male cats have only one X chromosome, meaning they are XY. It follows that a male cat can be either orange or black but not both. In order to be a tortoiseshell, the male cat must have an extra X chromosome. Males with XXY combination are often referred to as chimeras (3, 4, 5). These cats are unhealthy and infertile (6), similarly to humans with Klinefelter’s syndrome (7).

Because X chromosome exceeds the number of genes found in Y, female cats face a dilemma: how to manage that many genes?  Females overcome this problem by “silencing” one of their two X chromosomes, a phenomenon called “X Inactivation” (8). In every cell of the body, one of the two X chromosomes is inactivated (figure 1). A whole chromosome is not “silenced” but its parts which are activated or de-activated at random. The process itself is quite complex.  Some X chromosomes result in orange colored patches while others give rise to black patches. 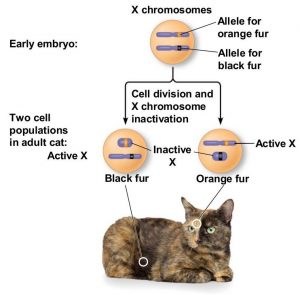 In the case of Venus, the black pigment was activated on one side of its face while genes for orange pigment were silenced by chance, leading to a nice symmetrical black pattern.

Why Venus has one blue eye and one amber eye? There is nothing unusual about this. Venus possesses a white spotting gene because as we can see from patches on its chest, and its white paws (9). White spotting gene is the cause of two different colored eyes (heterochromia). 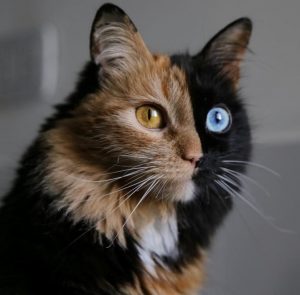 Quimera, whose name means in Spanish “chimera”, is a gorgeous long-haired calico. Quimera has a typical tortoiseshell face split. Just like Venus, it is lucky a cat who won a genetic lottery. A white patch on its neck is due to white spotting gene, hence the blue eye.

Quimera, despite its name, is not a chimera.

Other similar examples of cats that look like Venus and Quimera: 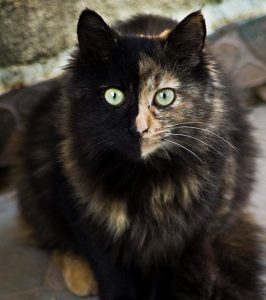 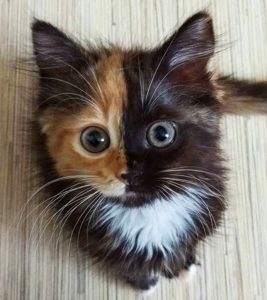 ·
Solving the mystery of Narnia’s face 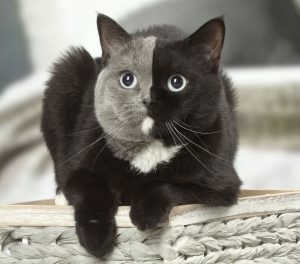 Narniais a British Shorthair mix that comes from the cattery that aims to produce coloured cats with blue eyes under a new cat breed name. Although Narnia’s blue eyes are due to white spotting gene, blue eyes in coloured cats without any white are associated with genetic deformities.

Narnia seems to have a split face that bears a resemblance with Venus and Quimera. However, Narnia is a male cat. Interestingly, some studies show that some tortoiseshell/calico male cats could be chimeras.  But Narnia is not a tortoiseshell/calico because one side of its face is black and the other is grey instead of expected orange/cream, therefore Narnia does not have an extra X chromosome.

Because half of its face is grey, this indicates that Narnia carries a dilution gene that lightens a color, turning a black into grey (10). This is true – Narnia’s mother has a solid grey coat. But there is one problem: a black and grey do not occur at the same time: The dilution gene lightens the pigment over the whole body.

Narnia is likely not a chimera. The possible explanation for the occurrence of black and grey together is a somatic mutation, a type of mutation that arises soon after fertilization in the developing embryo (figure 2). Narnia should normally be a grey cat, but the mutation inactivated the dilution gene everywhere except for its one side of the face (11).

This event is known as mosaicism – some male cats that look like tortoiseshell and are fertile are a result of mosaicism rather than chromosomal abnormality (12).

So-called chimera cats Venus, Quimera, Narnia, and others are not chimeras unless proven by a DNA test.

Some would ask is this possible to breed more of these cats with these unusual patterns? The answer is no, the patterns occurring either from being a chimera or by chance by normal biological processes cannot be passed on to offspring.

Maria is a researcher and self-proclaimed cat lover who is interested in smaller wildcats and feral cat welfare. She has a degree in Evolutionary Biology.

Don’t call me speciesist: hypocrisy of the animal...

Are dogs smarter than cats? Probably not